- December 29, 2019
Shocking anti-Jewish graffiti has appeared across several high streets in North London .
The Metropolitan Police confirmed officers are investigating after a synagogue and shopfronts in Hampstead and Belsize Park were vandalised overnight.
All of the graffiti shows a red or purple Star of David – the Jewish symbol – along with the date ‘ 9/11 ’.
It appears to be a reference to a racist conspiracy theory which claims Jewish people were behind the terrorist attacks.
Conservative councillor for Hampstead, Oliver Cooper, said he was sickened to find the anti-Semitic graffiti all over his neighbourhood. 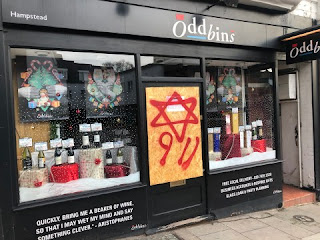 He wrote: ‘All decent people across Britain stand with our Jewish community – and we must move heaven and earth to eradicate this racist hatred, which was unimaginable just a few years ago.’
The Tory Cllr has been walking around Hampstead this morning taking pictures of vandalised shop fronts.
He wrote: ‘I am walking around Hampstead documenting all the anti-Semitic graffiti that mars our community this morning, and just got to South Hampstead Synagogue.
‘This is a place of peace and prayer, desecrated by the world’s oldest hatred.’
A police spokesperson said no arrests have been made.
Inspector Kev Hailes said: ‘This is clearly a concerning incident and one we are taking seriously.
‘We have liaised with our partners in order to remove the graffiti and various enquiries are underway to find who is responsible.
‘Officers will be on patrol throughout the area in order to provide some reassurance to local communities. Please approach us if you have any questions or concerns
‘I ask anyone who might have seen anything suspicious last night to call us and aid the investigation. Metro
‘The Met remains committed to tackling hate crimes in all its forms, and we will continue to work with our partners and the public to do so.