- December 30, 2019
At least 14 people have been injured, three of them seriously, in an apparent pyrotechnics explosion in the Catalonian city of Centelles, Spain.
The apparent accident took place during the Festa Del Pi celebration in the city. At least 10 ambulances and two emergency services helicopters have been dispatched to treat the injured at the scene. People who suffered more serious injuries are being taken to the Vall d'Hebron hospital.
The remainder of the festival will be closed to the public as a precaution, however, the local fire department has confirmed that there was no structural damage to the bell tower.
Meanwhile, the Catalonian police force and the Spanish bomb disposal team TEDAX have been deployed to the scene to investigate.
The Festa Del Pi is celebrated on or around the winter solstice and involves the ceremonial hunt for a particular type of pine tree which is then burnt to honour the patron saint of the village.
Organizers confirmed that the annual traditions, including the arrival of the pine tree to the church, will go ahead once all of the injured have been taken away, but they will be conducted behind closed doors. 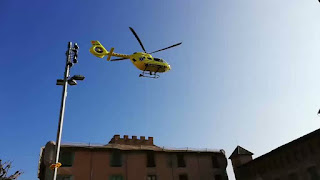