- December 28, 2019
Bankers around the globe are facing the biggest job cuts in four years, and their troubles could continue in 2020 as lenders are trying to cope with rising competition amid a slowing economy.
Nearly 78,000 people are set to lose their jobs, as more than 50 banks have revealed plans to downsize their workforce this year, according to Bloomberg, citing filings by the companies and labor unions. It is the highest number since 2015, when 91,448 employees in the banking sector were let go.
European banks will see the biggest layoffs, as they plan to cut more than 63,500 jobs or almost 82 percent of the total. North American banks come in second, as they reportedly plan to dismiss nearly 7,700 people. 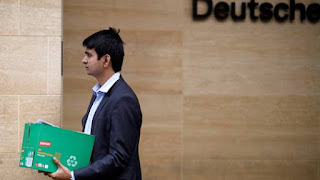 Top investment bank Morgan Stanley has recently joined other lenders in the effort to downsize staff, as it is reportedly planning to axe 1,500 (roughly two percent) of its workforce. But it is still far behind Deutsche Bank, which tops the list of planned job cuts with 18,000 employees set to be laid off through 2022 as part of an $8.3 billion overhaul. Rt
This year’s banking staff reductions bring the total for the last six years to more than 425,000. However, the figure might be even higher as many banks could eliminate jobs without disclosing their plans.
“Although it’s been a bull market, there’s not been a lot of primary activity and that’s made it very hard to pay the bills,” an investment director at stockbroker AJ Bell, Russ Mould, told Yahoo Finance UK.
The sweeping cuts might continue in 2020, as some analysts believe that banks continue to face “a number of uncertainties.” For example, Swiss multinational private bank Julius Baer as well as Spain’s Banco Bilbao Vizcaya Argentaria SA are reportedly looking into reducing their workforce.