- December 28, 2019
Miss Kenya, Irene Mukii, has been crowned Miss Africa at the 2019 Miss Africa Beauty Pageant in Calabar.
Mukii, who is a Mathematics and Computer Science student of the Jomo Kenyatta University of Agriculture and Technology, won the coveted crown in the early hours of Saturday in Calabar.
She defeated 21 other contestants in a keenly contested competition which saw Miss Angola, Daniela Lopes, emerge as first runner up and Miss South Africa, Ethel Maimela as second runner-up.
Speaking during the event, Governor Ben Ayade of Cross River, called for the adoption of humanity as the greatest of all religions in the world.
Ayade, who was speaking on the theme of the 2019 Carnival Calabar “humanity”, said that once humanity becomes a personal doctrine, people would rise above primordial sentiments.
“None of us has the luxury of knowing where he/she was before he/she was born or where he/she is going after death, all we know is that we live, and for today that we live, let us live for humanity. 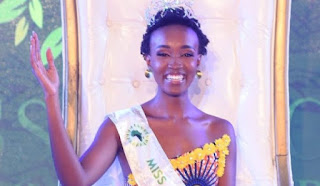