- December 28, 2019
The refusal of almost every Western media outlet to cover the leaks implicating the chemical weapons watchdog of doctoring its Syria report has become ridiculous, says a journalist who was barred from reporting it by Newsweek.
“These documents are very conclusive in what they show,” Tareq Haddad told RT after the latest release of internal emails from the Organization for the Prohibition of Chemical Weapons (OPCW) on Friday. The latest batch indicated an effort by the OPCW management to silence dissenting voices and cover up the very fact that there was evidence contradicting the West-favored narrative about the April 2018 incident in Douma, Syria. 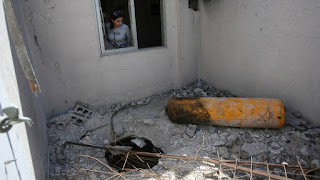 The OPCW report stopped short of accusing the government of President Bashar Assad of dropping chemical weapons on the Damascus neighborhood, which was held by jihadists at the time, and killing scores of civilians. It gave a post-factum rationale for airstrikes conducted by the US, the UK and France in the wake of the incident.
For weeks now an increasing number of leaked OPCW documents and whistleblower testimonies have been forthcoming, pointing to an alleged distortion of the facts found by the watchdog’s inspectors on the ground. With a few exceptions, the mainstream Western media has been silent on the unfolding scandal. Haddad attempted to cover the story in Newsweek, but the magazine’s management gagged him, leaving him with no other option but to resign in protest, he says.
He told RT the point when the story could be legitimately reported came several weeks ago, so the continued media obfuscation “has reached the point where it’s a bit ridiculous,” and amounts to abdication of responsibility to inform the public.
“I’m sure there are hundreds if not thousands of well-meaning journalists, who understand what the essence of journalism is. I am sure they want to write this story,” he said. “All I can say is: please, push this story. Even though I have resigned I don’t want the mainstream media to be dismissed as ‘fake news’. I want it to be respected.”