What -50°C looks like: WATCH steaming noodles frozen IN THE AIR by Siberia's sub-zero temperatures

- December 30, 2019
How cold are Siberian winters? A video demonstration shows how frigid temperatures in Yakutsk can stiffen a piping hot bowl of noodles within minutes – leaving a frozen mass that can even support the weight of a fork.
A resident of the east Siberian city decided to illustrate the bone-chilling power of -50 degrees Celsius (-58 degrees Fahrenheit). With cameras rolling, he used a fork to scoop up a healthy portion of freshly cooked noodles from a bowl.
After braving the frigid temperature for two minutes, he let go of the fork, revealing that the noodles were frozen in place – along with the utensil. Rt
A similar experiment was carried out by scientists at a station in Antarctica last year. They froze noodles in temperatures of -60 degrees Celsius (-76 degrees Fahrenheit). 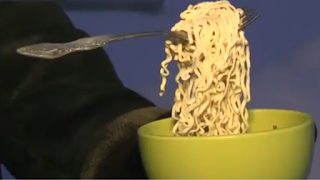