- January 21, 2020
The solidarity rally in support of Western Nigeria Security Network (WNSN), codenamed ‘Operation Amotekun’, has been stopped by the Nigeria Police in Lagos. Sun
As early as 7 am, fully armed police officers and members of the Department of State Service (DSS), numbering close to 70, stormed the venue of the rally at Gani Faweyinwimi Freedom Park, Ojota, barring entry into it.
The rally, which was organised by the Yoruba World Congress (YWC), was to hold simultaneously across six states in South-West region of the country 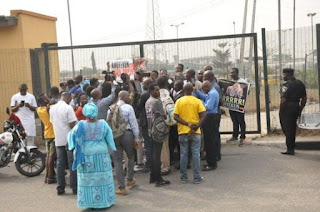