- January 31, 2020
A deeply divided United Kingdom has officially ended its 47 years of European Union membership as the clock strikes 11pm in London and midnight in Brussels — and the slated 11-month ‘transition period’ has formally begun.
The long and rocky road to the divorce began three-and-a-half years ago when 52 percent of Brits voted to cut their losses and take their country out of the 28-member bloc (now 27).
Three prime ministers, two general elections, and plenty of national anxiety and rancor later, the day has finally arrived, in a moment long-awaited by some and desperately dreaded by others. 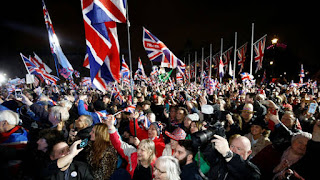