Burundi to give outgoing presidents luxury villa, over $500,000

- January 22, 2020
A luxury villa and a one-off sum equivalent to more than $500,000 - that is what presidents in
Burundi will receive after leaving office, according to new legislation adopted by the country's Parliament.
The move on Tuesday came months before an election scheduled for May, in which President Pierre Nkurunziza has said he will not run. 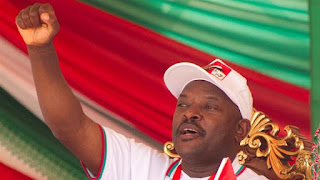 In 2015, his campaign for a third term plunged the country into violence and led to an enduring political crisis.
The new law states that at the end of the mandate, the president will receive "a luxury villa built with public funds in the location of their choice within five years, as well as a one-off allocation of one billion Burundian francs [$530,000]".
This amount is a fortune in Burundi where more than 65 percent live in poverty and where 50 percent of the country is food-insecure, according to the United Nations 's World Food Programme (WFP).
The legislation, adopted with 98 votes for and two against, differentiates between former heads of state elected via universal suffrage - of which Nkurunziza is the only candidate - and those who came to power via peace deal or military coup.
"A president who came to power via the simple consensus of a group of politicians does not have the same regard as one who was democratically elected," Justice Minister Aimee-Laurentine Kanyana told the national assembly.
The retired president will also get the same benefits as a serving vice president for seven years after they step down, and will for the rest of their life get an allowance equal to that of a legislator.
The cost and size of the villa that will be provided are not specified.
"The benefits that will be given to a president at the end of his mandate are exorbitant if one takes into account the crisis in the country, but it is a positive measure as it seems to indicate very clearly that Nkurunziza will in fact not run for the presidency," a diplomat in Burundi told AFP news agency on condition of anonymity.
In power since 2005, Nkurunziza surprised observers when he announced he would not seek another term in office, despite a new constitution in 2018 - adopted by referendum - allowing him to do so.