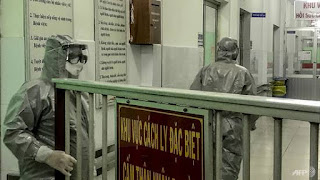 The deadly coronavirus that has killed 17 people in China has spread to a seventh country, with health ministry officials in Singapore reportedly confirming its first case of the disease.
The island city-state joins Thailand, Japan, Taiwan, South Korea, and the United States in confirming cases of the illness which originated in China’s Wuhan city.
A 66-year old man has tested positive for the virus in Singapore, according to the Straits Times. The newspaper cites Singapore’s health ministry in reporting that the man is a Chinese national and Wuhan resident.
A 53-year-old woman, who is also a Chinese national, also tested positive for the virus in preliminary examinations. However, that result has yet to be confirmed by further testing.

Vietnam :
Two Chinese nationals in Vietnam have tested positive for the SARS-like coronavirus and are being treated in hospital, officials said on Thursday (Jan 23).
A Chinese man living in Ho Chi Minh City was infected by his father who travelled to Vietnam on Jan 13 from the Chinese city of Wuhan, the epicentre of the virus.
The father was hospitalised on Jan 17 with a high fever, days before his son showed symptoms, health officials said.
Both were quarantined and tested positive for coronavirus, a new infection that has already
killed 17 people in China and infected more than 570 .