- January 21, 2020
Flight Centre Travel Group said that several domestic and international SAA flights had been cancelled on Tuesday.
“Our customers remain our top priority and we have been working through the night to advise, assist and re-accommodate any affected passengers where possible.
“The group is currently monitoring the situation, while awaiting official confirmation from SAA with regards to its flight situation,” it said.
Meanwhile, SAA spokesperson Tlali Tlali said they would not take responsibility “over what others have put out”. Timeslive
“Our own statement is to come out on this shortly.”
On Monday, the airline said all its flights to all destinations were operating as normal.
Meanwhile, government said it was still looking for R2bn to contribute to the airline, as part of its commitment to the airline's business rescue process.
The department of public enterprises said in a statement on Sunday evening that it was working with National Treasury to raise funds to save SAA.
“We are determined to contribute to the business rescue process so that we could minimise job losses and give birth to a rejuvenated SAA that all South Africans could be proud of.
At the time, public enterprises minister Pravin Gordhan said R4bn was needed for the operation, with government and creditors jointly committed to the process as post-commencement finance (PCF).
The department said it was determined to break the past patterns of “bailouts”, as these had become “moral hazards”. 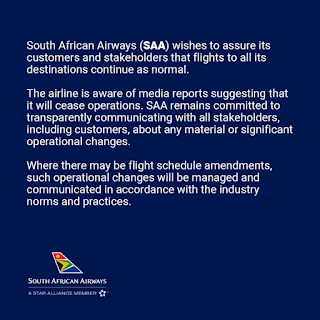