- January 24, 2020
The frequently flown airlines by Nigerian drug traffickers in 2019 were Ethiopian and South African airways, both coming in and going out, the National Drug Law Enforcement Agency (NDLEA) revealed today.
Garba Ahmadu, the NDLEA Commander at the Murtala Muhammed International Airport (MMIA) Command made the disclosure today as he reeled out statistics for the spent year.
He said the command arrested 101 suspected drug traffickers in 2019, made up of 87 males and 14 females, while a total seizure cases of 76 were recorded in the period under review.
In 2018, 93 persons were arrested.
“Also, the number of seizures/cases recorded in the year under review also increased to 76 in 2019 from 73 in 2018, showing an increase of 4.11 per cent.
“Summary of the drug seized shows that cocaine accounted for 9.03 per cent of total drugs seized, heroin 5.75 per cent, cannabis sativa 44.71 per cent.
“Others are methamphetamine which is 24.93 per cent, ephedrine 7.45 per cent and other psychotropic substances 8.13 per cent.
“Cocaine is 34.109kg, Heroin 21.72kg, cannabis sativa 168.922kg, methamphetamine 94.18kg, Ephedrine 28.14kg, psychotropic substances 31.99kg (Tramadol and Diazepam) 30.450kg.”
He said the mode of concealment included bag and baggage packing, ingestion and anal insertion; baggage was 80 per cent, while the others were 14 per cent. 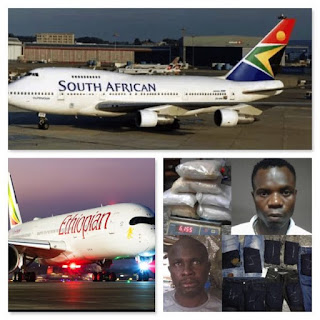