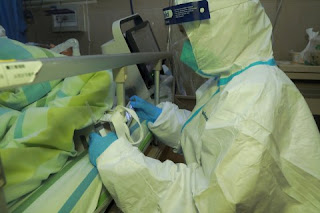 The NHS is braced for the coronavirus after it emerged that four people in Scotland are being tested.
The head of infection medicine at the University of Edinburgh confirmed there are three potential cases in Edinburgh and another in Glasgow.
Professor Jurgen Haas added he believes there will be many more cases from other cities in the UK.
The four people had travelled to Scotland from the city of Wuhan, China, which is at the epicentre of the outbreak that has killed 17 people. Metro
A further 630 people worldwide have been infected with the respiratory virus that emerged from a seafood and animal market.