- January 23, 2020
Greece's top administrative court has ruled in favour of extraditing to France a Russian man suspected of laundering billions of dollars in digital currency, a judicial official said on Thursday.
The Greek justice minister had in December ordered the extradition of Alexander Vinnik, who is accused of masterminding a US$4 billion bitcoin laundering ring and is wanted by both France and the United States.
Vinnik's lawyer called the decision unfair and appealed against it, calling the move "a death sentence", while the detained 40-year-old Russian launched a hunger strike.
But the top administrative court concluded the minister had the authority to make the decision, the judicial official said. The higher court ruling cannot be further appealed in Greece.
U.S. authorities accuse Vinnik of running BTC-e - a digital currency exchange used to trade bitcoin - to facilitate crimes ranging from computer hacking to drug trafficking since 2011.
Vinnik has denied the charges, saying he was a technical consultant to BTC-e and not its operator.
Since his arrest in a village in northern Greece in 2017, Moscow has requested that Vinnik be returned home, as it has done before with other nationals wanted by the United States. Reuters
The Greek ministerial decision mentioned that a second destination should be the United States and lastly Russia, meaning that when Vinnik's judicial proceedings are done in France he could be extradited further to the United States.
Vinnik has agreed to be returned to Russia, where he is wanted on lesser fraud charges amounting to 10,000 euros. 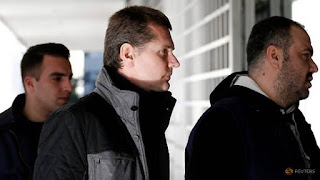