- January 24, 2020
The president and CEO of Hallmark's media brands is stepping down amid a conservative Christian backlash to an ad showing a same-sex couple.
Bill Abbott, the now-former head of Crown Media, which operates the Hallmark Channel, is leaving the company one month after the channel aired, then removed, four Zola ads showing two married women kissing.
Mr Abbott — after more than a decade leading the company — headed the cable network as well as Hallmark Movies & Mysteries, Hallmark Drama and Hallmark Publishing.
Mike Perry, CEO of Crown Media's parent company Hallmark Cards Inc, did not cite the ad controversy as the reason for Mr Abbott's departure and claimed that competition from other networks and streaming services has pressured the company to "find relevant new ways to grow our business and continue to produce high-quality programming that resonates with our growing audience".
The ads for the wedding registry company, which first appeared on the network in December, show a variety of couples at the altar, including two women. One ad exclusively features that couple. 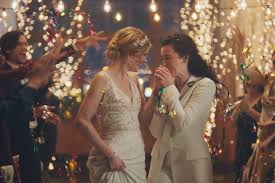