- January 29, 2020
Medical examiners identified the body of NBA legend Kobe Bryant after recovering the remains of all nine people who died in a helicopter crash near Los Angeles, officials said Tuesday (Jan 28).
Bryant's body was officially identified along with three others using fingerprints, two days after their helicopter crashed into a rugged hillside northwest of the city.
Meanwhile federal investigators finished their inspection of the crash site, handing it over to local authorities.
"We are done on the site," said Jennifer Homendy, a member of the National Transportation Safety Board. 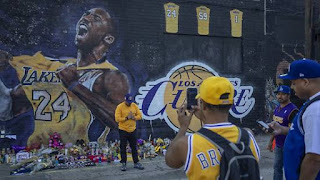