- January 29, 2020
Some sections of the Lagos popular Balogun market have been razed by fire on Wednesday morning.
“A major fire outbreak has been reported in Martins street, Lagos Island,” Lagos State governor spokesman Gbenga Akosile tweeted.
Akosile said the a combined team of the state safety workers are on ground to curtail the spread of the fire. 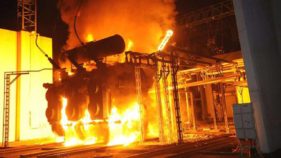 The cause of the fire outbreak is still sketchy but a Central Business District officials of Lagos State Government who spoke on condition of anonymity confirmed to The Guardian that the inferno started around 10 am when a generating set operated by one of the occupants exploded and caught fire.
Balogun market is one of the busiest and biggest in the state.