- January 20, 2020
An isolated case of Lassa fever outbreak was recorded on Monday in Asaba, the Delta State capital, as a serving member of the National Youth Service Corps (NYSC) was reportedly infected with the dreaded disease.
The Corps member identified as Yinka was rushed to the Federal Medical Centre (FMC) Asaba when symptoms of the ailments manifested earlier in the day.
He was later transferred to Irrua Specialist Hospital in Edo State after the virus was confirmed at Asaba FMC.
As at the time of filing this report, the state Commissioner for Health, Dr Mordi Ononye, could not be reached on the development as several calls to his cell phone went unanswered.
The NYSC state coordinator Mrs Olatoye Samuel could also not be immediately reached on her cell phone, although multiple sources quoted her as saying that the victim had been stabilised and transferred to Irrua.
NYSC spokesman Mr Chidi Nnochiri, however, declined comment on the issue, saying that he is not a medical expert to know if there has been a Lassa fever outbreak.
A source says that Yinka took ill on Wednesday last week at the Corpers’ lodge and was rushed to FMC on Friday when the case became critical.
“Yinka fell sick since Wednesday last week,” the source said. “But we were buying drugs thinking it was just malaria and he will be okay, but he was not getting better and his eyes were changing.
“His body also started changing to white as if it is harmattan but it was not, even his urine was dark in colour. So, on Friday, we decided to take him to FMC, Asaba. Sun
“After a series tests, it was confirmed it was Lassa fever and he was taken to Edo State today (Monday),” the source said. 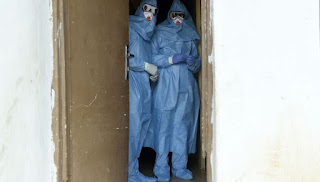