- January 22, 2020
The streets of London are no longer paved with gold, as the capital has become too expensive for anyone from a poorer background, a study has found.
Education charity the Sutton Trust says even the most socially mobile prefer to stay close to home rather than emulate Dick Whittington by seeking fame and fortune in the capital.
Two-thirds of them had never moved far from their home towns, the report said, adding that those from working class backgrounds who had built well-paid careers, in sectors such as law, medicine and academia, had remained local.
Only those from a privileged background were able to move to London to chase the best-paid jobs, the study called Elites in the UK: Pulling Away? found.
The report was based on analysis of data from the Office for National Longitudinal Study to build up a picture of the social mobility of people born in the 1970s.
Perhaps unsurprisingly, unpaid internships - requiring the worker to have enough money to live in the city without earning - are a major block on social mobility.
But if you live in the city, you will benefit, whatever your circumstances or background, said academics from the London School of Economics and Political Science.
Sir Peter Lampl, founder and chairman of the Sutton Trust, said the research shows that since the 1980s "London has cemented its position as the epicentre of the elites".
He added: "The Dick Whittington vision of moving to the capital to move up in the world is largely a myth. Those that benefit most from opportunities in London were either born there or are the economically privileged from other parts of the country."
Noting that more than two-thirds of the socially mobile have never made a long-term move there, he warned London is "essentially off-limits to ambitious people from poorer backgrounds who grow up outside the capital."
Prime Minister Boris Johnson has promised to level the playing field by improving opportunities for all, especially in the north where his Conservative Party unexpectedly won a host of seats as it swept back into office at last month's election.
It's "crucial" that the prime minister's promise is fulfilled, Sir Peter Lampl said. Sky
The Sutton Trust wants to see all internships of more than four weeks be paid at least the minimum wage, more degree and higher-level apprenticeships across the country and better access for all to top schools and universities. 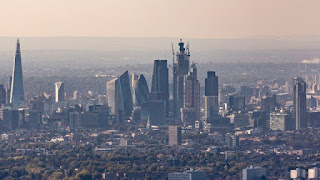