- January 31, 2020
Milwaukee Bucks forward Khris Middleton has been named an All-Star for the second consecutive season, the NBA announced today.
After making his first All-Star appearance last season, Middleton will once again join teammate and All-Star Game captain Giannis Antetokounmpo for the second straight season as Bucks representatives at this year’s All-Star Game. 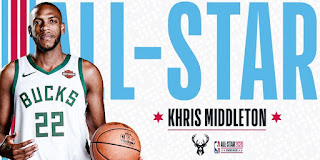