- January 22, 2020
Hundreds of people in Tarkwa Bay, an island near Lagos were evicted at gunpoint Tuesday by Nigerian navy personnel.
Bulldozers rumbled into Tarkwa Bay, a semi-rural area on an island in the city of some 20 million, as part of an operation the military said is aimed officially at stopping the looting of nearby oil pipelines.
“Soldiers have been in and out since the morning, shooting, and telling us to pack, pack, pack. They gave us one hour,” mother-of-four Minda told the French news agency, AFP.
“Nobody to help us carry, no cars. I have no where else to go to.”
Residents shouted that they were being “scattered” by the security forces as they loaded boats with household items, diesel generators and business wares before making the journey to other parts of the city.
Tarkwa Bay, which is accessible only by water, is one of the rare areas left largely undeveloped despite the breakneck pace of construction in Lagos.
Oil pipelines that supply Lagos run along beaches on the Atlantic coast in the area that are a popular escape for day-trippers from the city.
The Nigerian navy said the operation was aimed at protecting equipment belonging to the country’s national oil company from “vandals”.
“They build houses on pipelines and pump illegally,” Commander Thomas Otuji, a spokesman for the operation, told AFP.
“All people in the community aren’t vandals but if you don’t report it, you are part of it.”
Tarkwa Bay is the 24th community in the area that has received eviction orders as part of the broader operation by the navy, activists from the Nigerian Slum/Informal Settlement Federation said.
Tens of thousands of people have left their homes in surrounding areas since December 21 and their residences have been demolished, the organisation said.
Lagos has in recent years seen repeated forcible evictions of poor communities living in prime locations, especially along the waterfront, as developers look to cash in by building high-end properties. 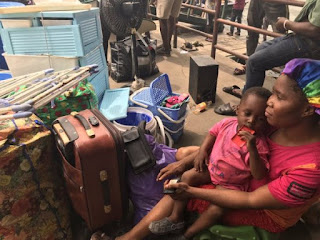