- January 26, 2020
Isaac Okoro and Samir Doughty took charge in the second half for No. 16 Auburn and the Tigers held on for an 80-76 win over Iowa State on Saturday afternoon in a Big 12-SEC Challenge matchup in Auburn, Ala.
Okoro scored 14 of his 19 points and Doughty got 10 of his 18 after the intermission to help the Tigers (17-2) stymie the Cyclones (9-10) and post their 14th consecutive home win.
Rasir Bolton overcame foul trouble to score a game-high 23 points and Tyrese Haliburton and Terrence Lewis added 12 each for Iowa State.
Auburn led by double digits for most of the final 30 minutes but the Cyclones never really went away and got within 78-74 when Bolton hit a 3-pointer, then 1 of 2 free throws with 28.1 seconds left. Okoro sealed the win for Auburn with two free throws with 9.1 seconds remaining.
The Tigers increased an 11-point halftime lead to a 17-point bulge a little over two minutes into the second half. The Cyclones were denied the chance to cut their deficit to 50-39 when a review ruled that forward Michael Jacobson’s layup didn’t beat the shot block buzzer. The Tigers were back up 55-37 with just over 14 minutes left. Reuters
The Cyclones whittled that gap down to 57-50 with a 13-2 run, but free throws by Okoro and Doughty put the Tigers back up by double digits before the Cyclones staged their late rally.
After going 11 of 24 from 3-point range their previous game, the Cyclones came out firing from long distance but without much success. They missed their first seven 3-pointers and finished only 7 of 27 for the game. Auburn was 10 of 28 on 3s.
Both teams return to conference play for their next games, with Auburn going to Ole Miss on Tuesday and Iowa State hosting No. 1 Baylor on Wednesday. 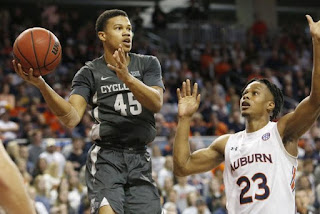