Rebic wins it for Milan after Ibrahimovic misses a sitter

- January 25, 2020
AC Milan forward Ante Rebic scored the winning goal for the second week running as they beat Brescia 1-0 away in Serie A on Friday, sparing the blushes of Zlatan Ibrahimovic after an extraordinary miss by the 38-year-old.
Ibrahimovic had only to tap the ball in from six metres after Theo Hernandez sent in a low cross in the 40th minute but the Swede instead contrived to shoot wide, his only excuse being that the ball might have been slightly behind him.
He made amends, however, by setting up the winning goal in the 71st minute. Ibrahimovic pulled the ball back from the byline and, after a scramble in the area, Rebic turned it from close range.
The win continued a mini-revival for Milan, who are unbeaten since Ibrahimovic returned for a second stint at the club in January.
They have won four and draw one of their five matches in all competitions following his arrival on a six-month contract and the win took them up to sixth in the table with 31 points from 21 games. Reuters
Brescia, stuck in the relegation zone with 15 points, were missing forward Mario Balotelli who began a two-match suspension after he was sent off for insulting the referee in a 2-2 draw with Cagliari on Sunday. 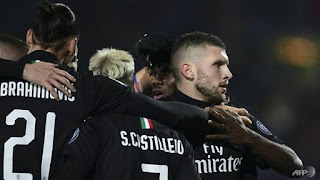