- January 22, 2020
US President Donald Trump is considering expanding his controversial travel ban to seven more countries, five of which are majority Muslim and two that are not, according to reports citing insider sources in Washington.
Trump, who is currently in Switzerland for the World Economic Forum in Davos, told the Wall Street Journal on Tuesday he was considering adding more countries to the list, but gave no further details. According to “two people familiar with the matter” who spoke with Politico, however, countries that should brace for restrictions are Belarus, Eritrea, Kyrgyzstan, Myanmar, Nigeria, Sudan and Tanzania. 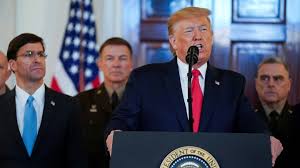