- January 25, 2020
At least eight people have died after an earthquake struck eastern Turkey, officials told local media.
The temblor, with a preliminary magnitude of 6.8 struck around 8:55 p.m. local time (12:55 p.m. ET) in eastern Elazig province, the country's emergency management agency said.
It was followed by several aftershocks, the strongest with magnitudes of 5.4 and 5.1, the Disaster and Emergency Management Presidency added.
The quake's epicenter was near the small town of Sivrice, which has a population of around 4,000, according to the United States Geological Survey. The larger town of Elazig, which has a population of 300,000, is around 25 miles away.
A map shows the epicenter of a 6.8 magnitude earthquake in eastern Turkey on Jan. 24, 2020.
USGS
Gov. Cetin Oktay Kaldirim told NTV television that three people died in Elazig province. State-run Anadolu Agency quoted Gov. Aydin Barus as saying five other people died in his nearby Malatya province.
At least 225 people were injured in Elazig and 90 in Malatya. Local administrator Cuma Telceken said up to seven people are believed to be trapped inside two collapsed buildings in Maden. Television footage showed rescuers searching for survivors among the debris.
People look at a collapsed building in Elazig in eastern Turkey on Jan. 24, 2020. IHA via AP
Pictures and video footage apparently taken in both Elazig and Sivrice and posted to social media, showed collapsed buildings and rescuers searching through rubble. NBC News was unable to verify this footage.
Turkish Defense Minister Hulusi Akar told reporters troops were on standby if needed.
Elsewhere, Mikail Suluk, the mayor of the town of Poturce to the south of the epicenter, said that around 100 buildings had collapsed in the town, although no casualties had been reported.
Estimates about the size of the earthquake varied slightly. The Kandilli seismology center in Istanbul said the quake measured 6.5, while the USGS gave the preliminary magnitude as 6.7.
It said Syria, Georgia and Armenia were also affected, along with Turkey. Rumbles were also felt more than 800 miles away in Israel. 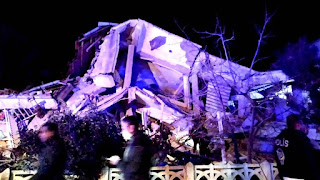