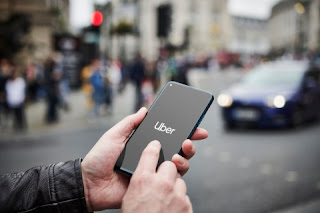 Uber drivers could soon set their own fares and unilaterally hike up the cost of journeys
The taxi firm has allowed some drivers in California to set their own fares, hoping the change will help it show that its drivers are independent contractors rather than employees under state law.
Uber drivers ferrying passengers from airports in Santa Barbara, Palm Springs and Sacramento can now charge up to five times the fare set by the company, Uber said.
The company in a statement said it has made these and several other product changes to preserve flexible work for its drivers since California’s new law designed to improve working conditions in the gig economy went into effect this year.
‘We’re now doing an initial test of additional changes which would give drivers more control over the rates they charge riders,’ Uber said.
Drivers at the three airports will be able to set a fare multiple of up to five times Uber’s base rates. Starting next week, drivers will also be able to charge less than Uber’s rates if the company surges prices at times of high demand.
The initial tests are limited to the three airports and do not represent a final version of the feature, the company said, adding that drivers’ control over their earnings will evolve in the coming weeks and months.
This is the latest in a series of changes the ride-hailing company has made in response to the new law. Earlier this month Uber informed its California customers it would switch to providing estimates as opposed to fixed prices for its rides.
The Wall Street Journal first reported on the test of the new feature.