- January 21, 2020
Topline: Multiple outlets reported Tuesday afternoon that the first U.S. case of coronavirus has been confirmed, after China announced earlier in the day that six people have died from the new illness and nearly 300 more have become sick from it.
The first U.S. coronavirus patient is male, according to the Washington Post, and in stable condition after arriving back in the country with pneumonia.
Notably, the patient arrived in the U.S. from Wuhan, China, before federal health officials began screening passengers for the illness at three major airports.
China and the World Health Organization (WHO) both confirmed Monday that the virus can be transmitted from person to person, and the New York Times reported that the U.S. case is further evidence of this.
The Centers For Disease Control (CDC) is expected to formally confirm the U.S. coronavirus patient Tuesday afternoon, according to CNN . Forbes
Key background: The first new coronavirus case was reported on December 31 in Wuhan and thought to be contracted from exposure to animals at a seafood and meat market there⁠. According to the Times, officials have closed and disinfected the market. Coronavirus belongs to the same group of viruses as the common cold, Severe Acute Respiratory Syndrome (SARS) and Middle East Respiratory Syndrome (MERS). The 2003 SARS outbreak killed nearly 800 people while infecting 8,000 more, causing widespread panic before being contained. MERS has been present in the Middle East region since 2012 and remains an ongoing threat.
What to watch for: WHO will hold a meeting on Wednesday to determine whether to declare an international public health emergency and if it should issue travel restrictions. Tens of millions of people will travel in China and abroad this week to celebrate the Lunar New Year holiday with their families, which the Post said is the world’s biggest migration event. 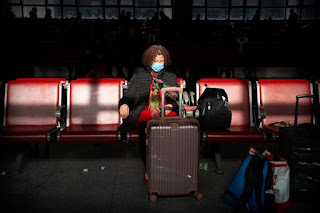