US Senators voted 51-49 not to call on more witnesses

- January 31, 2020
The Republican-majority Senate has rejected Democrats’ demand for additional witnesses in the impeachment trial of US President Donald Trump.
Senators voted 51-49 not to call on more witnesses beyond the 18 that testified in the proceedings led by the House Democrats last year.
Two Republicans, Susan Collins (R-Maine) and Mitt Romney (R-Utah), joined the Democrats in calling for additional witnesses – such as former national security adviser John Bolton. The rest of the GOP sided with the president’s lawyers, who argued that all the relevant testimonies and documents should have been produced during the proceedings in the House, which ended on December 18, 2019 with a partisan vote to impeach Trump.
Senate Majority Leader Mitch McConnell (R-Kentucky) called for a recess after the vote, meaning that the Senate could go back into session at any moment. There has been speculation that McConnell was planning to prolong the proceedings until after the president’s annual address to Congress, known as the State of the Union, on Tuesday. That has not been confirmed, however. 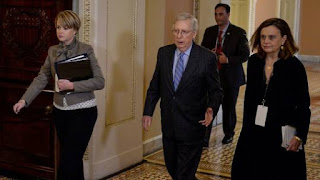