- January 24, 2020
American teenager Cori 'Coco' Gauff contiuned to prove she is the real deal as she knocked out defending champion Naomi Osaka in straight sets in the third round of the Australian Open.
Gauff, 15, overcame Osaka 6-3 6-4 as the American youngster claimed yet another big-name scalp as she marched into the second week in Melbourne.
The unseeded Gauff had beaten veteran US great Venus Williams in the first round of this year's tournament - repeating the feat she achieved at Wimbledon last year - before battling past Sorana Cirstea in the second round in Melbourne.
But greater things were to come against Osaka as Gauff showed maturity beyond her years in springing a major upset at Rod Laver Arena. 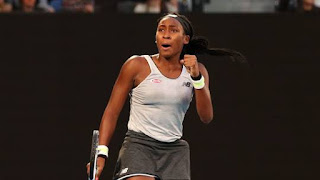