13 children died, 20 Injured in a Stampede at a Kenyan primary School

- February 04, 2020
Thirteen children have died in a stampede at a Kenyan primary school as they were let out of class to go home this afternoon, police have said.
Kenyan authorities said more than 20 other students were injured.
The country's Red Cross tweeted that it was responding to the incident.
According to reports, students were "running out of class" at the end of the day when some fell from the stairwell on the third floor of the building.
Kenya's opposition leader, Raila Odinga, tweeted that "there must be an immediate and thorough probe to get to the bottom of this incident".
"My heartfelt condolences to parents that have lost loved ones in the unfortunate and regrettable tragedy at Kakamega Primary School. I wish a quick recovery to the injured children and pray that God grant strength to the affected families," the tweet read. 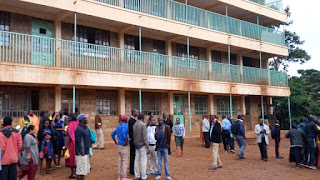