- February 01, 2020
American Sofia Kenin counter-punched her way back from a set down against Garbine Muguruza to win her first Grand Slam title at the Australian Open with a 4-6 6-2 6-2 win on Saturday. 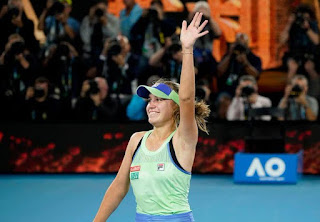 The 21-year-old Kenin, seeded 14th at Melbourne Park, converted her second matchpoint against the twice Grand Slam champion, who double faulted on the final point, to end an engrossing contest that lasted more than two hours.
Kenin and Muguruza produced a fitting and intense final under the closed roofs of a packed Rod Laver Arena.
Muguruza had arrived in Melbourne suffering from a virus that forced her to quit the Hobart International, but the Spaniard was soon back to playing to her strength which helped her reach the top of the women’s rankings in 2017.