- February 03, 2020
The singer was decked out in all white Sunday at the Hard Rock Stadium in Miami ahead of kickoff and with a line of troops behind her bearing our country's flags ... she let it rip on the mic. Demi did a pretty standard version of "The Star Spangled Banner" ... it was great.
What's funny though is that before her performance, an old tweet of hers surfaced online from 2010, which reads ... "One day, I'm gonna sing the national anthem at a super bowl. Onnnee dayyy...." Welp, she can definitely check that off the list now. 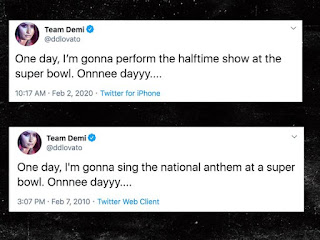