- February 03, 2020
In a proclamation published on the White House website, the US said Nigeria and the five other affected countries were among the worst-performing in the world.
However, it said there are prospects for near-term improvements for the six countries.
“The process began on March 11, 2019, when the United States government formally notified all foreign governments (except for Iran, Syria, and North Korea) about the refined performance metrics for the identity-management and information-sharing criteria,”
the proclamation read.
“DHS identified the worst-performing countries for further interagency review and for an assessment of the potential impact of visa restrictions.
“In addition, the United States government, led by the department of state, continued or increased engagements with many countries about those countries’ deficiencies.
“A number of foreign governments sent senior officials to Washington, D.C., to discuss those issues, explore potential solutions, and convey views about obstacles to improving performance.
“As a result of this engagement, one country made sufficient improvements in its information-sharing and identity-management practices and was removed from consideration for travel restrictions.”
In the proclamation, Donald Trump, the US president, said the acting secretary of homeland security submitted a report on September 13 recommending the actions to be taken on the countries identified including “incentivizing those foreign governments to improve their practices”. 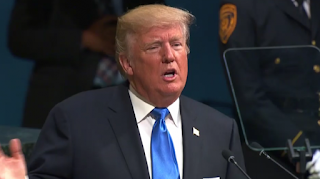