- February 02, 2020
Anthony Davis had a team-high 21 points, LeBron James ran up a triple-double and the Los Angeles Lakers used a 44-point first quarter Saturday night to power a front-running 129-113 victory over the host Sacramento Kings.
Avery Bradley poured 16 of his 19 points into the first 12 minutes for the Lakers, who were coming off a 127-119 home loss that followed a tribute to the late Kobe Bryant on Friday night.
The Lakers improved to 7-0 on the second night of back-to-backs, riding Bradley’s four early 3-pointers to lead by as many as 24 in the first 12 minutes. James’ finished with 15 points, 10 rebounds and 11 assists for his 11th triple-double of the season, one off Luka Doncic’s league lead, and the 92nd of his career. Only Oscar Robertson (181), Russell Westbrook (146), Magic Johnson (138) and Jason Kidd (107) have more career triple-doubles.
De’Aaron Fox scored a game-high 24 points, and Buddy Hield had 22 for the Kings, who had won three of their last four. 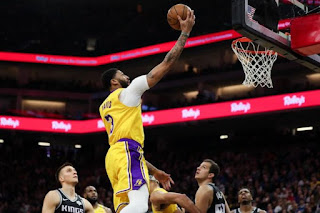