Massive riot in Lagos, as police clash with protesters over Okada ban

- February 03, 2020
A massive riot has erupted in Lagos, Southwest Nigeria following the ban on okadas and tricycles from plying certain routes in the metropolis by the Lagos State Government.
The protest has led to a clash between the police and okada riders in Ijora area of the state as the police tried to stop the protesters.
The protesters, in their large number blocked the expressway and burnt tyres on the road. The police, in a bid to stop the protest led to the riot.
It was gathered that the police had shot canisters of teargas to disperse the large number of protesters at Ijora Olopa.
Twitter user, Ademide tweeted: “Dear Lagosians kindly steer clear of Ijora Olopa area. A shootout presently occurring there and there’s damage to properties going on. Police are said to be exchanging bullets with Okada and Keke riders. Don’t fall victim. Find alternate routes.” 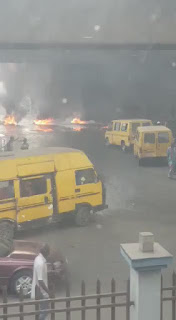