Palestinians cutting all ties with Israel, US

- February 01, 2020
Palestinian leader Mahmud Abbas announced Saturday a cut of all ties with Israel and the United States, including security cooperation, after Washington unveiled a controversial Middle East plan seen as favouring Israel.
Abbas has made similar declarations before and it was not immediately clear what it would mean in practice.
His comments came as the Arab League rejected US President Donald Trump's plan, which had enraged Palestinians.
"We are informing you that there will be no relations with you (Israel) and the United States, including on security cooperation," Abbas said at an extraordinary meeting of the pan-Arab bloc in Cairo.
He said the move followed the "disavowal of signed agreements and international legitimacy" by the US and Israel.
Israel will have to "bear responsibility as an occupying power" for the Palestinian territories and Palestinians will press ahead with resistance using peaceful means, he added. 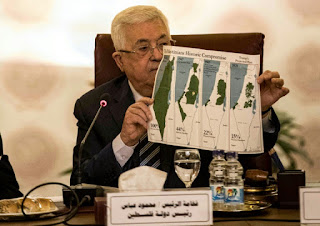