- February 02, 2020
Pablo Sarabia, Angel Di Maria, Kylian Mbappe, Layvin Kurzawa as well as a Daniel Congre own goal put the French champions on 55 points from 22 games.
Montpellier, who had keeper Dimitri Bertaud sent off after 17 minutes with midfielder Joris Chotard also picking up a red card two minutes from time, are fourth on 33 points.
Second-placed Olympique de Marseille travel to Girondins de Bordeaux on Sunday.
“We made a good start and after they were down to 10 men, it became easier,” said Di Maria.
Sarabia put the hosts in front in the eighth minute when he curled a fine shot into the top corner.
Bertaud was then shown a red card for handling the ball outside his box.
Di Maria doubled the advantage four minutes before the break with a fine chip after being set up by Sarabia and Congre turned a corner into his own net three minutes later.
Mbappe netted his 36th goal at the Parc des Princes in 34 matches in the 57th minute with a cool finish after being played through by Neymar.
Fullback Kurzawa rubbed salt in Montpellier’s wounds in the 65th with a powerful volley from inside the area. 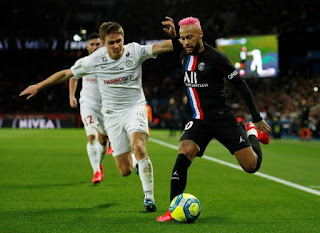