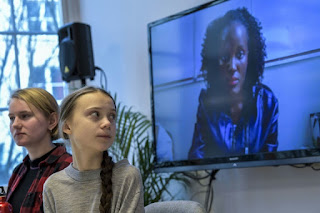 After a racism debate in Davos on the invisibility of African climate activists, Greta Thunberg held a press conference Friday with fellow eco warriors from Kenya, Uganda and South Africa to stress the importance of their voices.
Vanessa Nakate of Uganda was at the heart of a viral debate at the World Economic Forum in Davos after she was cropped out of a news agency photo of young activists, including Thunberg, taken after a press conference.
A 23-year-old graduate in business administration, Nakate was the only black person and only African in the photo shoot.
She accused the Associated Press of racism in cropping her out.
The agency said the photographer had modified the photo for composition purposes and later apologised, calling it a "terrible mistake".
Nakate said she did "not want to talk about" the incident, other than to say that "it was quite a frustrating moment."