- February 02, 2020
Ecuador’s president Lenin Moreno has been criticised for saying women only report
harassment “when it comes from an ugly person”.
Mr Moreno made the comment at an economics conference in the city of Guayaquil on Friday, where he also said that men are “permanently subject to the danger of being accused of harassment”.
According to local newspaper El Universal, he said that although it was “good” that women report harassment, he added that women sometimes “are angry with ugly people”.
“That is to say that it is harassment when it comes from an ugly person,” he explained. “But if the person is good-looking, they usually do not necessarily think that it is harassment.”
Mr Moreno, 66, added: “Already, in the case of my age, it would not be harassment but sexual decline. Sometimes, we exaggerate things.” 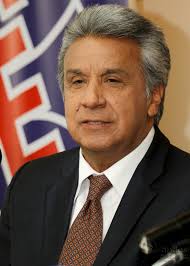