- March 26, 2020
Venezuelan President Nicolás Maduro was i ndicted by U.S. federal prosecutors Thursday on charges of “narco-terrorism conspiracy,” as part of the Trump administration’s pressure campaign to oust Maduro following a highly disputed election in 2018.
The charges were unveiled by Attorney General Bill Barr, the New York Times reported, along with top prosecutors in Miami and New York.
The indictment accuses Maduro and a dozen government officials of conspiring with FARC, a U.S.-designated terrorist group in Colombia, in an effort to use Venezuela for narcotics shipments to finance a longstanding civil war against Colombia’s government, the Miami Herald reported.
Besides Maduro, other senior officials charged in the conspiracy are its chief justice and minister of defense, according to the Times.
Maduro rejected the charges, the Washington Post reported, calling them “a conspiracy from the United States and Colombia” and that as president, “I’m obliged to defend peace and stability for all the motherland, under any circumstances.”
The State Department is offering $15 million for any information that would lead to the arrest of Maduro, the Times reported.
In addition to the narco-terrorism and cocaine trafficking charges, other counts in the indictment included possessing machine guns and conspiring to possess machine guns, according to the Times.
Crucial quote: “Maduro’s grip on tyranny will be smashed and broken,” President Trump said in his February State of the Union address.
Key background: U.S. prosecutors believe Maduro oversaw a drug cartel that aimed to “flood” the country with cocaine and “inflict the drug’s harmful and addictive effects on users,” the Times reported, citing the indictment. The
Post described the charges as a “sharp escalation” in U.S. efforts to pressure Maduro to leave office, and follows sanctions that have excluded Venezuela from the U.S. financial system. Maduro came to power in 2018 after a highly disputed presidential election. His opponent, Juan Guaidó, swore himself in as acting president in January 2019, and has been recognized as such by 60 countries. The Trump administration has expressed support for Guaidó, including in his bid for a military uprising in April 2019 against Maduro, which failed. 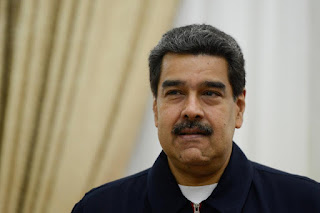