- March 23, 2020
The Chief of State to the President, Abba Kyari, has written to the Speaker of the House of Representatives expressing displeasure over the alleged refusal of some members of the House of Representatives shunning airport screening when they touched down at the airport.
He wants the erring House members to visit the test centre immediately, maintaining that their action was a serious threat to national security.
In the letter, Kyari did not state the airport where the incident happened and the House members involved.
The letter which was dated March 21 and addressed to the speaker reads: “It was has been brought to the Honourable Minister of Health recent report to this office that some members of the House of Representatives are refusing to subject themselves to medical screening at airports.
“As you are aware, this airport screening is our primary line of defence and refusal by any citizen to subject to this test is a threat to our nation.
“Accordingly, you are kindly requested to direct all members of the House of Representatives who returned to Nigeria from foreign trips to report themselves to the nearest NCDC test centre with immediate effect.
“As always distinguished President of the Senate, please accept the assurances of my highest regard 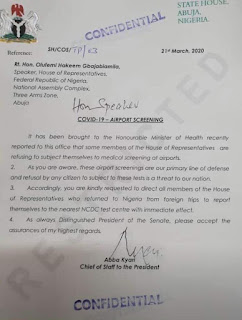