- March 26, 2020
Air France airline has begun to evacuate French citizens from Nigeria.
The evacuation which kicked off following the approval given by the Federal Government to an earlier request by the Air France General Manager in Nigeria, Michel Colleau, saw about 260 nationals of the country being evacuated out of Nigeria on Thursday.
The evacuation exercise is expected to continue on April 2nd and end on April 9th 2020.
The aircraft which came through Cotonou landed at the Lagos airport at 2.05pm and departed Nigeria about 3.44 pm after undergoing the boarding procedures.
According to the Airport General Manager in Lagos, Mrs Victoria Shinnaba, the airline has three special flights to operate.
Her words: ” There are three flights not only today. We have the approval, their crew are not even coming down, the crew will not come out at all.” 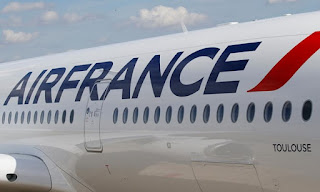