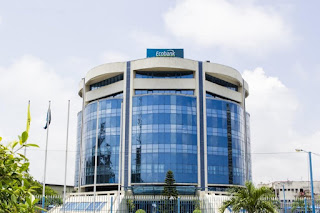 An official of Ecobank Plc in Akwa Ibom State, South-South Nigeria, has been convicted for fraudulent diversion of over N7million belonging to the bank customer, the Economic and Financial Crimes Commission (EFCC) has said.
The EFCC in a statement on Monday gave the name of the convict as Ekpe Sunday. He was prosecuted at the Federal High Court, Uyo, by the anti-graft agency.
The EFCC said the money – N7, 067,576.55 – which was the proceeds from the sales of shares belonging to one Okon Edem was lost through a fraudulent transaction engaged in by Mr Sunday.
Mr Sunday, alongside his co-worker in the bank, Dennis James, was also prosecuted for conspiracy, forgery, and impersonation. Ecobank was one of the defendants in the trial. They were first arraigned on May 21, 2014.
The court, presided over by Justice Ijeoma Ojukwu, sentenced Mr Sunday to two years in prison, with an option of N1 million fine. He was also ordered to pay the victim N2 million as restitution, the EFCC said.
The other bank official, Mr James, was, however, discharged and acquitted by the court.
Justice Ojukwu found Ecobank culpable. She said the fraud victim, Mr Edem, lost his money in the bank because of the bank’s negligence and, therefore, ordered the bank to refund N12.9 million to him.
The EFCC has also arraigned one Idongesit Eyibo at the Federal High Court, Uyo, for allegedly giving misleading information to the anti-graft agency on his participation in a 2013 lottery organised to commemorate the silver jubilee of the state.
The charge against him reads, “That you, Idongesit Eyibo, on or about July 24, 2019, at Uyo within the jurisdiction of this honourable court, did make a statement to officers of the Economic and Financial Crimes Commission via a written petition addressed to the office of the said commission, which to your knowledge was intended to mislead the officers of the commission in investigating the petition, thereby committing an offence contrary to Section 39 (2) (a) of the Economic and Financial Crimes Commission Establishment Act, 2004, and punishable under Section 39 (2) (b) of the same Act.”