- March 17, 2020
The Lagos State government said on Tuesday it had started intensive contact tracing for the passengers that travelled with the third confirmed case of Coronavirus on British Airways.
The state Commissioner for Health, Prof. Akin Abayomi, who disclosed this at a media briefing in Lagos, said the third COVID-19 case came on a BA75 flight that arrived in Lagos on March 13.
He said the third case lives with her parents and one sibling, adding the entire family had been transferred to the infectious diseases Hospital at Yaba as a preventive measure and monitoring.
Abayomi said: “We have started the contact tracing process and thankfully she obeyed the instruction and she confined herself to her home where she has been in contact with her immediate family.
“That helps us tremendously in contact tracing.
“We will be reaching out to the passengers of the flight as we did with the index case.
“But, while we are making this public announcement, anybody who was on that flight as a passenger should reach out to the emergency numbers or the new toll-free number – 0800-CORONA.”
Abayomi also said there were three suspected cases Coronavirus at the Mainland Hospital, Yaba.
According to him, the suspected cases are Nigerian that returned from the United States on March 10.
He said the US returnees came through the Middle East and had developed symptoms of high fever and body pain.
The Minister of Health, Dr. Osagie Ehanire, had earlier on Tuesday confirmed the third case of COVID-19 in the country.
He said that the new case was independent of the index case (the Italian) currently being treated at the Mainland Hospital, Yaba.
Ehanire said the third case was a 30-year-old woman who returned from the United Kingdom on March 13 and observed self-isolation, developed symptoms and tested positive to COVID-19. 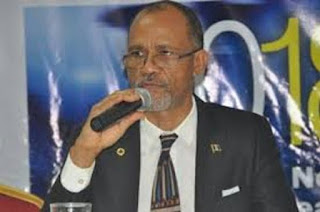