- March 26, 2020
Former President Jimmy Carter is asking donors to "forgo (their) next gift" to the Carter Center and instead support local groups working to ease the "suffering caused" by the coronavirus pandemic.
"As you are well aware, our country is facing a health crisis. Though the behaviors of COVID-19 are not fully known, what we do know makes it a global threat to our physical and economic health," the former Democratic president wrote in a message Tuesday also signed by former first lady Rosalynn, and their eldest grandchild, Jason Carter, the chair of the Carter Center Board of Trustees.
"We all have every confidence that we will come together as a nation and overcome this invisible threat," their message read. "This virus and its impact must be addressed at every level of government and society. Each of us is gratified at the examples of volunteers and community organizations that have quickly mobilized to help those in need."
"It is in this spirit that we ask you to forgo your next gift for the work of the Carter Center and direct it to a local group that is reducing the suffering caused by this pandemic," they added.
The Carters established the Carter Center in 1982 in Atlanta, with initiatives that include fighting diseases in developing countries. One of the key accomplishments of the Carter Center is the near eradication of Guinea worm disease from an estimated 3.5 million cases in 1986 to 54 provisional cases in 2019 . 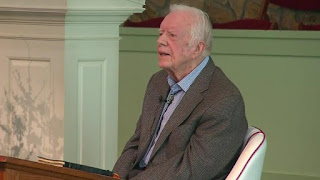 In October, despite a fall in his home that required stitches, Carter, 95, still traveled to Nashville that day to help with a week-long volunteer project building houses for Habitat for Humanity.
The 39th President and former first lady reside in Plains, Georgia, where they have lived since leaving the White House in 1981.