Joe Biden all but cements US Democratic presidential nomination

- March 18, 2020
Biden swept all three states in voting on Tuesday - Illinois, Florida, and Arizona - in another blow to Vermont Senator Bernie Sanders - whose early strength evaporated as African Americans and working-class whites across the country sided with Biden. 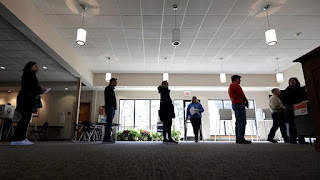 In the big prize of the evening, Florida, election-watchers called the state for Biden almost immediately after the polls closed at 7pm local time (23:00 GMT). Illinois was called for the former vice president within 30 minutes of the polls closing there and Arizona was handed to Biden almost as quickly.
In an online speech from his home in Wilmington, Delaware after the results, Biden made an explicit appeal to the younger voters who had flocked to Sanders.
"I hear you," Biden said. "I know what’s at stake. I know what we have to do. Our goal as a campaign, and my goal as a candidate, is to unify this party and unify this nation."