- March 19, 2020
Grace Fusco, 73, died of complications
from coronavirus on Wednesday night, hours after her son and five days after her daughter succumbed to the virus,
The New York Times has reported
. Fusco and four other children of hers were being treated at CentraState Medical Center in Freehold Township, New Jersey, the article said, citing family members. Fusco’s eldest child,
Rita Fusco-Jackson, 55, died Friday of the virus
. She had been the second victim of COVID-19 in New Jersey. The matriarch’s eldest son, Carmine Fusco, of Bath, Pennsylvania, died at a hospital near his home on Wednesday, hours before his mother in New Jersey, all according to The Times, which cited Roseann Paradiso Fodera – the family’s lawyer, who is also a cousin – as its source.
This is what he wants people to know Grace Fusco was the mother of 11 children and grandmother of 27. She was unaware that two of her children had died of the illness before her own death, The Times reported. Four other children who contracted the coronavirus remained hospitalized Wednesday night, three of them in critical condition, the article said. Fusco died after spending Wednesday “gravely ill” and breathing with help of a ventilator, Paradiso Fodera told The Times. “Nearly 20 other relatives are quarantined at their homes, praying in isolated solitude, unable to mourn their deep collective loss together,” The Times reported. “If they’re not on a respirator, they’re quarantined,” Paradiso Fodera told The Times. “It is so pitiful. They can’t even mourn the way you would.” A person who had contact with a man who became New Jersey’s first victim of COVID-19, who died March 10, had attended a Fusco family gathering recently, The Times reported. John Brennan, 69, a horse trainer and mainstay in the New York racing community,
was the first victim of the virus in New Jersey
. Paradiso Fodera told The Times that the gathering was a routine Tuesday dinner. “A party to most people was a regular dinner to them,” she said. 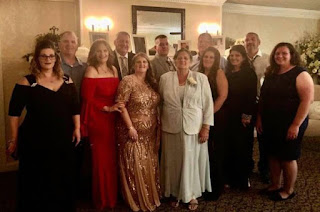 Cases of the novel coronavirus at the Jersey Shore grew Wednesday
as officials announced eight more in Monmouth County and four in Ocean County. New Jersey health officials said two people who tested positive for COVID-19, the illness caused by the coronavirus, died over the past day, bringing the state's death toll to five. Both were older than 60 and had preexisting medical conditions, officials said. New Jersey Gov. Phil Murphy announced 162 new COVID-19 cases on Wednesday, sending the state’s overall count to 427.