- March 17, 2020
A Nigerian man whose friend became the third person to test positive for coronavirus in Nigeria, has called out the Nigeria Centre for Disease Control (NCDC), for stating that his friend is receiving medical care when nothing has been one about her situation.
Recall that the Minister of Health, Osagie Ehanire said the third case of coronavirus in the country is a Nigerian lady who just returned to Lagos from the UK recently
@dondekojo stated a lot could have been avoided if the the NCDC were proactive in testing his friend who returned from the UK on March 13. He added that the agency told him that "UK isn't a high risk country" and they (NCDC) couldn't promise a test until he kept pestering them.
He tweeted;
Now that the cat is out of the bag, I have a LOT to say about this provess, for the people that made this partisan and cursed me, it’s alright. That it had to take me making noise on twitter to get a test done should WORRY EVERYONE!
What we won’t do is to tell more lies, no one has attended to her since last night, she hasn’t been given medication and is not being treated! Stop the media parade and do some work! This isn’t about getting international accolades.
The Nerve on the people that cursed me announcing this thing. I’m livid. But I’m more concerned about recovery. A lot will be said later
Guys, please stay away from public places, wash your hands and self isolate. We aren’t ready for this at all, I was naive about and was praising our efforts until it hit home. We don’t have enough test kits or isolation facilities. There’s slow/ no response to everything. Please
We could have avoided a lot of effort we’d now have to do on contact tracing if this test had been done since Friday. @NCDCgov basically told me that UK isn’t high risk and won’t promise a test until I kept going at them. Stay safe.

The Nigerian man who last week shared a tweet in which he disclosed that "coronavirus testing is non-existent in Nigeria", also lashed out at Lagos State Commissioner for Health, Prof Abayomi who he accused of lying about his friend receiving medical care.
He tweeted;
Hello @LSMOH @ProfAkinAbayomi you lied in the Press release that she’s “receiving care” when no one has attended to her at all. No toiletries or regular power supply, lack of any sort of medication apart now. Fix up.

The Twitter user also called out the Minister of Health, Osagie Ehanire who he accused of lying about officials of the Lagos State Emergency Operations Centre being dispatched immediately to collect samples of his friend after putting a call across to the agency. 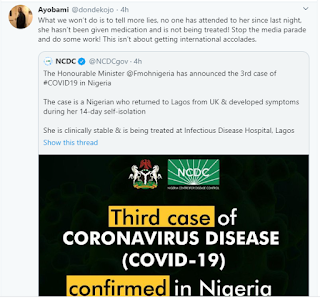