- March 26, 2020
Presidential aide, Bashir Ahmad, on Thursday, reacted to a report that Muhammadu Buhari and his chief of staff, Abba Kyari, have sneaked out of Nigeria to receive medical treatment abroad.
The report went viral after Jackson Ude, who claimed to be former Director of Strategy/Communication under former President Goodluck Jonathan shared purported leaked audio.
‘LEAKED Audio: Buhari, Abba Kyari, secretly flown out of Nigeria?’ on #SoundCloud #np,” Jackson Ude posted about 2 pm on Thursday.
However, about 4 pm, Personal Assistant on New Media to the President, Bashir Ahmad, replied Jackson Ude.
He said: “This is not a threat or a way to ask you to stop spreading the fake news you have been dishing out for long, but I am very sure you know exactly the consequences of your actions.”
But the damage had already been done with Nigerians on Twitter demanding for the president to appear.
As at 5 pm on Thursday, “Where is Buhari” was trending on Twitter.
However, Bashir Ahmad issued another rebuttal.
“FAKE NEWS ALERT: The voice note that President@MBuhari and Chief of Staff, Abba Kyari have been secretly flown out of the country is totally UNTRUE.
“It was intentionally recorded to cause chaos and fear. This fake news was originated and being circulated by one @jacksonpbn,” he tweeted around 5:40 on Thursday evening. 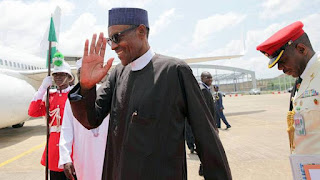