- May 09, 2020
President Trump has described the shooting death of unarmed black jogger Ahmaud Arbery as “very disturbing” and said he trusted Georgia law enforcement would get to the bottom of his alleged murder.
“I saw the tape and it’s very, very disturbing,” he said. “I looked at a picture of that young man, he was in a tuxedo, and I will say that it looks like a really good young guy,” Trump told “Fox & Friends” on Friday morning of the case, which has sparked national attention.
“It’s a very disturbing situation to me and my heart goes out to the parents and the family and the friends … It’s heartbreaking and it’s very rough, rough stuff,” he added.
A Georgia father-son duo were arrested and charged with murder Thursday night after
video emerged Tuesday of the pair approaching Arbery in their pickup truck before fatally shooting him on Feb. 23.
The 28-second clip shows Gregory McMichael, 64, and Travis McMichael, 34, both armed, getting out of the truck and scuffling with Arbery before he is shot and falls to the ground.
Arbery’s family described his death as a “modern lynching” and say the 25-year-old was simply out for a run.
The McMichaels told police they confronted Arbery because they believed he was a burglar who had been targeting the neighborhood.
Trump said justice would be done and speculated that something may have happened between the McMichaels and Arbery off camera.
“Justice getting done is the thing that solves that problem and again it’s in the hands of the governor and I’m sure he’ll do the right thing,” he said.
“You know it could be something that we didn’t see on tape, you know, if you saw things went off tape and then back on tape, but it was a troubling,” he added.
“I mean anybody that watched it, certainly it was a disturbing or troubling video, no question about that, but they have very good law enforcement in the state of Georgia and I’m sure they’re gonna come up with exactly what happened. It’s a sad. It’s a sad thing, very sad thing to see that,” he said. 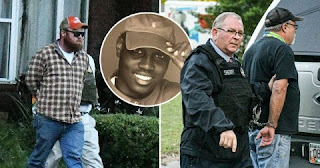